Turns out it wasn't a terminal disease--at least, as far as we know. Moonshadow's lab work is very good for a boy his age. But the eye will have to come out. He had a cataract that pushed his lens out of place, and now it's where it isn't supposed to be and can't be put back. The good news is that his other eye is in good shape and shows no evidence of cataract, so he should have one good eye for the rest of his life, barring any unforeseen problems. I'm relieved that the whole situation isn't as horrible as what I'd feared, but it's been stressful. He's been my little furry mascot for so many years now. And just in case anyone wondered who really writes the manuscripts.... 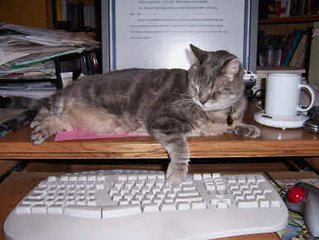 Agh! Ten days since last post! In the meantime, I've moved the blog to the new Google account, blown away most of my customizations on accident and had to enlist the computer guru husband to help me fix the problem, and had to take the cat to the vet on Friday after discovering that one of his eyes had gone grey overnight. Freaky problem, still don't know what's up. He has a veterinary ophthalmologist appointment tomorrow. The kids and I are still behind on this years' correspondence school assignments. To top that all off, I had an ear infection and some kind of tonsil infection as well. It's just been a mishmash of various things going wrong or threatening to. And then I had to mostly switch my schedule from working at night to being up and trying to work during the day. I keep falling asleep in front of the computer, and it doesn't seem to matter what time of day or night it is. So for the past week or so, writing has been dicey.

The good news is that I'm partway through Chapter 12, out of a planned 16. Yay for me. If I can just keep it in gear, I may yet finish this thing before the end of the year. I've even got a tentative plan for a sequel, though I haven't heard yet whether the first one is going to fly. Never hurts to be prepared, I guess.

I know I've said this before, but whether this book makes it or not I'm just loving the experience of writing it. It's been great fun and I feel good about it. Even if it proves to be just a little no-go break from writing the Oantran stuff, it's been a good break.

That last paragraph was the PC version, the humble version, the cautious version. There's a little war going on in my brain that looks a lot like the cartoon of the angel on one shoulder and the devil on the other. Here's how that dialog would go if it were an actual cartoon:

Angel: You've never written an urban fantasy before. You don't really know what you're doing, so don't expect miracles.
Devil: Ah, what do you know? You've never written urban fantasy before, either. This book is all that--it rocks. It's The One that'll get us published. Trust me. Would I lie?
Angel: Like a rug. You'll do anything to keep us in the game. Even lure us on with candy-coated dreams of publication and marketing and comic books based on the characters. You shouldn't get our hopes up. You're turning us into a masochist.
Devil: Everyone needs a goal....

I did it! The first ten chapters of Beyond the Pale are done, reviewed by the Moxie, edited, polished, and out the door. I also revamped the synopsis and sent it out, too. Bob should get the package in a few days. Now I'll work on the last several chapters while I wait to see what his reaction will be. No matter how good it might have sounded over the phone, it also has to read well on paper, and this is my first urban fantasy.

I'm reluctant to make any assumptions about how well it turned out, but I will say that I like it, I had fun writing it, and I'm going to have fun writing the rest. That's what I'll do while I'm waiting. Whatever happens with it from here on, the best part is that it was a challenge for me, a new direction. Setting it in Ireland was a greater challenge yet. It stretched my skills and my boundaries as a writer, and that's always a good thing.

Now that the first half is mailed out, I'm about to have a great time writing the first scene in the next chapter. It's a cheery little scene that takes place in a hospital room, over the bed of someone who.... Ah, but that would be a spoiler, wouldn't it?

I voted. Spent four hours at the polls in a long line that meandered up and down two hallways and into several rooms. One family ahead of me waited for about two and a half hours and then had to bail halfway through because their kids had school in the morning. I arrived at 6:30 pm and didn't get done until 10:30 pm. I drove home and let the Huz heat up some dinner for me, and then we sat and watched CNN. We still haven't gone to bed, and I won't for some time; I still have two chapters to edit.

Ugh--in reference to the line at the polls, not the chapters. I won't state my political leanings here on the blog. Anyone who cares that much and reads my books in the future will probably figure it out. Goodnight, America, and good luck.

One evening this week--Sunday or Monday, I can't remember which--the kids and I sat in front of a DVD movie (The Corpse Bride) and put together goodie bags for the trick-or-treaters. Call it a quirk, but I've almost completely stopped giving out candy on Halloween. I go to the party outlet and buy silly little Halloween trinkets and gizmos like plastic spider rings, skeletons, rubber eye balls, rats, pens, etc. to stuff into little bags instead of candy. I figure that most kids are going to come home with more candy than they should consume in a year's time anyway. I'd rather not add to it. That said, I admit that I was a hypocrite and gave my own kids bags that consisted of Harry Potter chocolate frogs complete with wizard cards, Harry Potter cockroach clusters, and Bertie Bott's Every Flavor Beans. I mean, come on! It's Harry Potter candy, which is so expensive that it isn't worth it to buy it more than about once a year anyway. It seems that Jelly Bellies has outdone themselves this year by adding two new flavors to the Beans: Bacon and Deviled Egg, I think they were. Yum.

Anyway, we had a lot of goodie bags left over because we didn't get as many trick-or-treaters as we expected. It was cold, cold, cold outside. Gary took the kids around and walked the German Shepherd, and when they got back, the kids dropped the candy and headed straight to the kitchen for some hot chocolate. Andromeda headed straight for her bed, where she curled up and tucked her nose underneath her tail. Poor puppy. The kids tucked her in underneath their jackets, and finally she got warmed up again. She had been starving to death as a stray before we adopted her; I guess even after the three months of good food, she still needs to put on more of a fat layer. If I'd have thought about it, I'd have put one of the kids' jackets on her before she went out.

The time from last week into this one was crazy. Last Friday, I went to a drama performance with a Halloween theme because a friend was going to be in it and asked me to come. Saturday was our party. Sunday was a party held at another friend's house, which I couldn't go to and sent the family instead because I had a writers' meeting. Then Monday gave us barely any time to catch our breath before Tuesday's usual Halloween craziness ensued. How I thought I'd actually get my chapters mailed off to my agent before Halloween, I have no idea. However, I do have things almost ready to go.

The Moxie reviewed my first nine chapters (sans Chapter 7 because somehow I missed printing it out in my haste before the meeting). It took them several hours to read through the whole thing, and I have to say that they are the most amazing crit group ever! I saw how carefully they were going over every page. They found all my little inconsistant details and snafus, and now I'm in the process of editing and polishing those chapters to make them submission-ready. I still need to finish writing Chapter 10, which I believe to be the midway crisis point of the book. Word-wise, it doesn't fall exactly in the middle of the manuscript, which was at the end of Chapter 8. I need to get chapters 7 and 10 to the Moxie for review, finish all the edits, and then format, print and mail. Now that all the Halloween craziness is over, I estimate that I have perhaps one more week's work to do before it hits the Post Office.

On the downside, I wanted it mailed before Halloween, dang it! Bob estimated somewhere between the end of October and the first week or so of November, so technically I'm still in the ball park. On the upside, I'm more than halfway through the whole manuscript, and unless it needs a huge rewrite or some other drastic change, I'll have only six more chapters to go to finish the whole book. I'm looking at maybe being done by Christmas, or mid-January at the latest. (Crossing fingers, thinking good thoughts....!)