I once mentioned the closet door technique as a method for plotting. Well, since then I've discovered a very neat accessory--Post-It notes sized and lined like index cards. Up to now, I've been attaching my colored index cards to the closet door with poster tape. I know that some writers routinely use Post-It notes, but I've never liked the size of the little square ones. Plus, I like the lines on index cards. With all of the preferred attributes combined, moving scenes around on my closet door has just gotten easier. No more index cards sticking to the poster tape and having peel-off problems when I need to move them around. 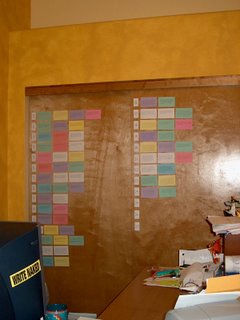 And the Pevensie kids had to discover their magical world inside the wardrobe!

One of the Moxie just recently sent me this link to an article about the current trend in fantasy publishing. As it happens, several months ago, I wrote this blog entry relating to the same issue. Did I call it, or did I call it?

My fiendish plan is ticking along perfectly. It's only a matter of time....

My latest fiendish plot is going well, too. I've actually finished the first chapter of the new book, which for now we are calling "Shifts of Perception," or "Shifts" for short. Got the thumbs up on it from the Moxie this evening at our meeting. Val says that by the end of the first chapter, the characters already have so many problems that she wonders how I'm ever going to get them out of it. Heh.

Return to Bliss and Torture

I never realize just how much I need my writing until I've been away from it for a while. When I first come back to it after a break, it's like a reunion with an old lover. How could I have gone four months without it? And yet, I'm glad I did, because I think the occasional break keeps me from burnout. Toward the end of the second book of this trilogy, I was beginning to think I'd implode if I had to rewrite the darned thing one more time! But at the same time, I wanted to do whatever it took--wanted to get it right. From beginning to end and through all the revisions, Shadows of Memory actually took about two years. And a tough two years they were. They were years that saw the death of my grandmother and several other rough milestones in my personal life. They saw lots of hard work and lots of frustration. But it's worth all that time and effort just to hear my agent say the magic words, "I love the rewrite." He loves the rewrite. Thank the gods! Now we have two books for him to market, and only one more for me to write to finish this trilogy.

I'm into it now, gang! In fact, I'm four sections into it, and already I'm hooked. I'm delighted to be with my beloved characters again, and more than ready to start torturing them some more. This book gets a magical serial killer dumped right into the midst of some other huge issues the characters must face. The name of everyone's major issue? Family.

Such a nice little word, family, and yet it pushes so many people's buttons. No one else can disappoint us in quite the same way as a family member. No one else has quite the same dirt on us, or quite the same hold. I intend to probe deeply into these issues in book three. While a killer roams the halls of Gondrevin Palace, my heroes must explore questions such as: What is family? Is a family the group you're born into, or the one you choose? Do we place too many expectations on our family members--perhaps more and harsher expectations than we would dream of placing on anyone else? And when someone we love lets us down, how does that change the relationship? If we get through such a breach, are we then stronger because of it, or will we retain scars that never fully heal? In other words, those poor characters are in for a rollercoaster ride to hell and back. Which means I'll be with them on that rollercoaster, hanging on white-knuckled to the end.

Dare I whoop with delight?

Back in the Saddle

Ok, I started the third book of my trilogy. Finally. I didn't get too far yet, but what I have looks pretty good.

The family has been contemplating a possible move, and that's been stressful in the extreme. Certain circumstances have developed that might cause it to be necessary, but none of us really wants to do it. I've always known I would not be here in Idaho forever, but I wasn't quite...done with it yet. Or maybe I'm just more resistant to change than any mutable fire sign has a right to be. After a couple of stressful weeks, we are at the stage of possibly not having to move, but things are still up in the air. Urk!

That's about it for today--short and sweet. But I'll post more as this new book begins to develop. In the meantime (and in case I don't get back here as soon as I'd like,) Happy Thanksgiving and all that jazz!