I got your orb right here

I've been reading online about spirit orb photos vs. dust mote photos. I've looked at dozens of pictures to see what was consistent about how dust motes look vs. spirit orbs. Recently, I was in my backyard on a still night, and just started taking pictures at random to see what, if anything, would appear. What I got was very interesting. For starters, yes, I used a digital camera and yes, I used a flash. When I first posted this, I'd thought I hadn't used one, but tonight when I went out to repeat the experiment, I found that without flash, nothing showed up at all--just blackness. There was light behind me coming from a porch light, but otherwise there actually wasn't much light coming from elsewhere. Note that I snapped these pictures in quick succession, one right after the other, so there is a progression.

In the first one, the orb appears very small and near the ground in the middle of the picture, just in the lower foreground of the picnic bench. 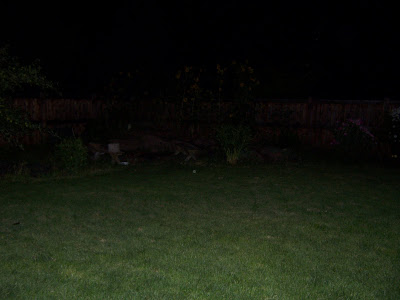 In the second picture, it has risen and moved to the left. 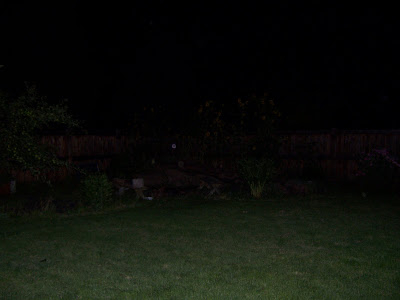 In the third, it appears much larger and has risen still higher and moved farther to the left. 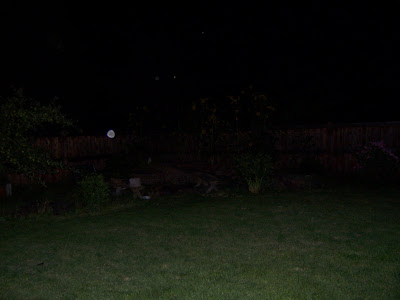 There was no breeze, so that same object would not have been able to rise and move left, and then come closer to me, had it been just a dust mote. The reason I believe it is the same orb is because of its shape. This is more of an off-round shape, but far too regular to be a bug. (I looked at bug photos also.) That not-quite-round shape is fairly consistent in each of the pictures. This is not to say that just because it isn't perfectly round that it cannot be a dust mote, but the shape and the positioning makes me believe that this is the same one in all three pictures. Also an article I read states that dust motes tend to be perfect circles with no border. This is not a perfect circle and has an obvious border. It also seems to fit another orb criteria in that it is colored in the "cool" end of the spectrum. When we looked at these photos on magnification, it became apparent that the object was giving off its own light. It has a flaming blue aura around it as well as a ring of white inside that, and there are other colors in the middle. It looks a lot like a scientific picture of plasma that I also saw online.

There is a lot of controversy surrounding orbs and whether they're all dust or can all be explained away. I don't know exactly where I stand on this. I'm not so quick to just explain things away, but I also don't want to automatically assume that every orb is a spirit. So my pictures here may be, or may not be. I don't know for sure. I also have other photos of the same location at the same time frame in which there are no orbs whatsoever. Control shots, if you will.

Had there not been an obvious progression of the location of the orb, I'd have assumed it was just a dust mote. My husband and I have looked at numerous other pictures with known dust motes in them, and mine look decidedly different from that--especially when the magnification reveals more detail like the fiery blue aura around it. There was no moisture either; it was a hot, dry summer night near Boise, ID. However, I will leave you to draw your own conclusions about whether I have a beautiful dust mote picture, or whether I actually caught a picture of someone visiting me that night. If nothing else, we had fun, right?

Looks like our local indie bookstore, Rediscovered Books, is planning a joint book release party for my crit partner Val Roberts and me in September. Val's science fiction romance, "Blade's Edge" was released in ebook version last year and in print this July. So we're going to have a joint party and book-signing. More details to follow when I have them.

Rediscovered Books may well be the only bookstore in Idaho that is actually carrying physical copies of Warrior Wisewoman 3. Two of the first three copies they ordered sold in one miniature stampede on the night our local Speculative Fiction group had their meeting, so they've ordered more. As our friend Bruce told us, "It's good to be the store owner. You can do what you want." Especially when that includes stocking print-on-demand books, which some of the larger bookstores like Borders or Hastings can't even get at all. And as I discovered, an independent store owner can make certain other executive decisions, such as choosing to place a certain science fiction anthology right next to Jim Butcher's latest release on the endcap. Gotta love it.

Word of mouth, folks. And Amazon reviews--lots of them--from those who have read the anthology, always help!

I got my contributor's copy in the mail not too long ago, and after a day of having it sitting next to my computer on my desk, where I kept wanting to pick it up and look at it again, and again, and again...I finally had to go put it on the shelf so I'd stop messing with it and try to get some actual work done.

Here's Library Journal's review of Warrior Wisewoman 3. Scroll down; it was the third review from the end of the page.

I'm hooked on the new book by Yasmine Galenorn, called "Night Myst". Her writing has really hit the sweet spot with this one, in terms of her execution (no, not her executions, although there are plenty of those in the plot.)

What I'm hooked on is the relationships between characters, especially the main pair, even though it's got (cough, cough) vampires in it, as too many books seem to have these days. And then she takes it a step further and puts vampiric fae in it, and as her characters even say in the book, that's just so...wrong! And yet, I'm deer in the headlights because her main character is great and I liked her from the get-go, her male lead rocks, even though he's one of the (groan) vampiric fae....

I've had several people tell me they've been looking for Warrior Wisewoman 3 in their local bookstores lately. If it's not already, it should soon be available for your booksellers to order through Ingram. It just needs to finish propagating through all the systems. In the meantime, all the Amazon links are up and working, including the international ones. Barnes and Noble can also get it for you. Since it's a print-on-demand book, you'll need to order it from them online or ask them to order it in for you.

The only store I've spoken to who can't seem to get it is Borders, and apparently Borders can't get print-on-demand books at all, which is why the book doesn't show up in their system.

And thanks, every one of you who has been asking about this book. You (and your reviews of it, posted on Amazon and elsewhere) are what will make this book a wild success for all of us!

Warrior Wisewoman 3 is up on Amazon in the U.S.